Watershed Stewardship
The Susquehanna River is a major river located in the Mid-Atlantic region of the United States, overlapping between the lower Northeast and the Upland South. At 444 miles (715 km) long, it is the longest river on the East Coast of the Unted States By watershed area, it is the 16th-largest river in the United States, and also the longest river in the early 21st-century continental United States without commercial boat traffic.
The Susquehanna River forms from two main branches: the North Branch, which rises in Cooperstown, NY and is regarded by federal mapmakers as the main branch or headwaters, and the West Branch, which rises in western Pennsylvania and joins the main branch near Northumberland in central Pennsylvania.
The river drains 27,500 square miles (71,000 km2), including nearly half of the land area of Pennsylvania. The drainage basin includes portions of the Allegheny Plateau region of the Appalachian Mountains, cutting through a succession of water gaps in a broad zigzag course to flow across the rural heartland of southeastern Pennsylvania and northeastern Maryland in the lateral near-parallel array of mountain ridges. The river empties into the northern end of the Chesapeake Bay at Perryville and Havre de Grace, Maryland, providing half of the Bay's freshwater inflow. The bay lies in the flooded valley, or ria, of the Susquehanna.
A watershed, also called a drainage basin, is an area of land that drains into a river or stream. The Susquehanna River watershed is known as the Susquehanna River Basin. The Basin is further divided into six subbasins, following the mainstem and three of its major tributaries, the West Branch Susquehanna, Juniata, and Chemung Rivers. Each stream in the Basin also has its own watershed. There are 88 major watersheds in the Basin that encompass the largest rivers draining directly into the Susquehanna River or its three main tributaries, with some exceptions in the Chenango and Tioga Rivers and Bald Eagle Creek Watersheds. 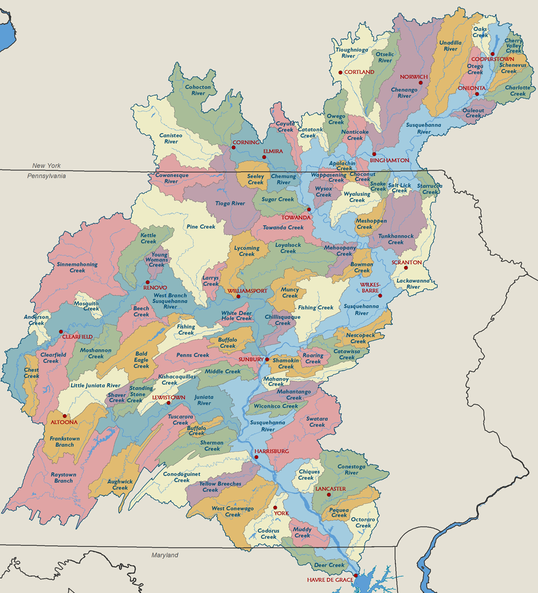